While the buffalo and Longhorn cattle may appear similar in many ways, there are key differences between the two majestic creatures that populated the Wild West. Starting off with the buffalo, the rich history of the bison begins with the tract of land named the Great Bison Belt.  The population would significantly lower due to the intervention by man, along with disease that came through close quarters in domestication. The buffalo belonged to the plains or wooded area, with further distinguishing terms applied based on their sex and

Furthermore, the majestic warm coat of the buffalo served the mammal well during the winter, while its summer fur being far lighter and comfortable allowed for the buffalo to flourish even more. Going deeper into the differences of the buffalo, the sex of the mammal had quite an effect on the size, males being larger and heavier. There was a notable difference in the overall shape of the buffalo based on the location of the mammal. The buffalo from the wooded areas were larger than the ones from the plains. Even more notable were the differences that came due to human intervention. When the buffalo were bred with the intention to yield as much meat as possible, the weight would reach a rather formidable amount and their body would reflect the change. They were fed a diet consisting of plants and were used for a wide variety of products ranging from clothes, food, and, leather. The main focus of the bison was for clothing.

However, the buffalo wasn’t merely a tool just to be used within the Wild West. It was a symbol for many, particularly the Indians who belonged to the plains. Often there would be stories that would portray the buffalo as far more than a simple beast. Many items that the Indians used were created by harvesting different parts of the buffalo to make tents and weaponry. There were also ceremonies that involved the majestic creature. As a matter of fact, the buffalo was even given a sacred status among the Sioux Indians and entailed their Seven Sacred Rites. 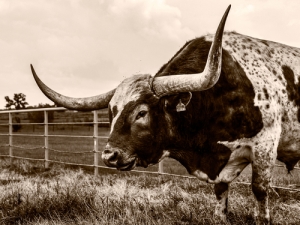 When considering the Texas Longhorn, their arrival to the land via Christopher Columbus had started quite an important part of the Wild West. Not only were these creatures strong and able to survive under harsh conditions, but they were also often utilized for food, travelling and other byproducts. Unfortunately, one of the diseases that spread in the Wild West was also attributed due to the Longhorn cattle. The Texas fever originated from a tick that the Longhorn cattle had become infected with. The tick did not directly affect the Longhorn cattle but would infect nearby mammals and led to tremendous conflict between the different species of animals. Despite this, the longhorn cattle thrived and regained a strong place within the Wild West as a valuable resource.