Myra Belle Shirley, famously known as Belle Starr, was born in 1848 near Carthage, Missouri. She was known to be a popular west wild outlaw. She was given the name ‘May’ by most of her family members. May Shirley graduated from Missouri’s Carthage Female Academy, an

institution founded by her father John Shirley. She also learned piano and attained classical education during her time at the institute. In 1864, after an attack in Carthage, May’s family had to move to Scyene, Texas.

As written in stories, it was this place which associated the Shirley’s to a number of Missouri-born criminals, including the Younger brothers and Jesse James. May also knew James and the Younger boys from before as she grew up with them in Missouri. Local Confederate sympathizers called May’s brother, Captain Shirley. After the Civil War, the Reed family also moved to Scyene and in 1866 May Shirley married Jim Reed. She ran away with Reed and became his common-law wife. They resided in California for some time where their son Edward was born, soon after, they moved to Texas where she fashioned herself as the “bandit queen”.

She used to dress up in either buckskin and moccasins, or velvet and feathers. In 1874, John Reed was killed after his astonishing holdup of the Austin–San Antonio stage. Belle Shirley was considered as an accessory in this case, though not a direct participant. For a time being, Shirley managed a livery stable and continued to have unpleasant connections, both professional and personal. 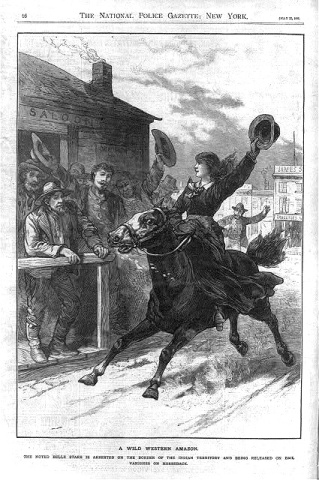 Shirley then shifted to Oklahoma Territory where she met Sam Starr, a friend of Jesse James and the Youngers. She later married him in the year 1880. They resided on a ranch on the Canadian River, which was renamed Younger’s Bend and was also used as a hiding spot for all the outlaws. Her reputation grew to be such that she was known as a part of a gang that preyed on ranchers, travellers and cowboys.

In 1883, Belle Star and her husband Sam were both indicted for stealing horses and served 9 months in the federal penitentiary in Detroit. Belle Star was indicted three more times in the following years. In the year 1887, Sam Starr was killed in a gunfight and Belle found a new lover to settle with after Sam’s death. In 1889, Belle Starr was shot in the back and died instantly. There were many possible suspects for her murder, including her own son Edward as well as the neighbors. However, the murderer was not identified. Her grave is at the Younger’s Bend, and on her gravestone there is a bell and a star. The biography of Belle Starr was published by Richard K. Fox after her death. Richard was the publisher of National Police Gazette. He portrayed Belle to be the beautiful girl of Old Southern heritage who chose the criminal path in order to avenge the death of her brother.