During the first half of the 19th century, the majority of cattle drives passed through the open range, which was unsettled land where the animals could roam freely. At first, the ranchers and farmers living in the area shared these fields willing. During the 1860s, however, many of them began fencing off their lands, using barbed wire, because the mingling of roaming animals with their stock was facilitating the spread of tick fever and other diseases. In 1867, six states went as far as to make laws against the driving of cattle north, which caused a drastic decline in the number of herds that went through the open ranges. By 1885, as much as half the cattle on the plains had died due to overgrazing, overstocking, drought and severe winters causing the herders to completely avoid this route thereafter. 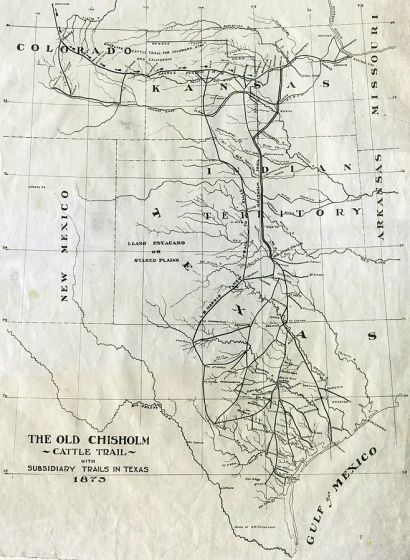 In order to overcome the problems that leading the cattle through the open range were causing, Joseph G. McCoy opened a cattle shipping facility in Abilene, Kansas. It was located west of farm country, in order to prevent disputes with those along the route. This facility quickly became the centre of the cattle shipping industry and, in order to make for the quickest journey possible, Jesse Chisholm marked out a trail which ran the 520 miles from Fort Worth, Texas, across modern day Oklahoma to the Abilene railhead.

The Chisholm Trail became the solution to the problems that ranchers and farmers had with the cattle grazing on their land, and is believed to have been the most important cattle trail at the time. Even though it went through the Native Indian territory, the herders were allowed to pass as long as they paid the charge of 10cents per cow.

The cattle industry continued to expand and new trails opened up, many moving westward. In 1871, the Chisholm Trail lost its importance when Dodge City replaced Abilene as the major shipping port. By 1880, however, it regained its popularity which it maintained until the industry decreased significantly as rail shipments began to take the place of trail driving cattle.

In order to ease the pressure of the long journeys that the animals and those accompanying them had to undertake, cow towns developed along the trails to ensure that the groups were able to rest and revive themselves along the way. The majority of these towns thrived during the peak of the era, and the most prominent ones had railheads from which the herds were shipped to the Chicago Stockyards. The first major cattle town erected was Abilene, Kansas, followed by Wichita and Dodge City, which became known as The Cowboy Capital of the World in the 1880s. Other towns, which developed as a result of the cattle drives, were Las Vegas, New Mexico; Amarillo, Texas and Miles City, Montana.

These towns had diverse populations, including buffalo hunters, railroad construction gangs and freighting outfits where the cattle was bought and sold. There were also facilities for the cowboys to enjoy themselves, after months of abstinence and monotony. Each town did its best to provide good food, lots of liquor, beautiful women and 24hr gambling.

In the 1890s, with the expansion of the railroad, meat packing was done closer to where the herds lived and many of the long cattle drives became unnecessary. They have still left a mark on the area and the entire history of the United States. Today, there are a few cattle drives that still take place in the west, and cowboys that live and work in the area, ensuring that the era of the cattle trails still lives on.