On January 24, 1848 James W. Marshall stumbled upon a yellow metal while building a lumber mill for pioneer John Sutter, in Coloma, California. Together they tested the metal and discovered that it was gold. Even though Sutter wanted to keep the news a secret it quickly spread and prospectors began flocking in. By spring, the first influx had arrived and consisted mostly of California residents, as well as a few from Oregon, Sandwich Island and Latin America.

Most of the gold miners arrived in 1849 with approximately 50,000 – 60,000 Americans and another 30,000 – 40,000 international prospectors. Every country had its representatives in the California mines. Regardless of the route taken, via land or sea, the journey would have been a difficult one for these ‘49ers.’ Many people died from diseases, such as cholera and fevers, or accidents along the way, and others arrived at the mines exhausted but eager to make their fortune. They created temporary homes in tents, deck cabins, boarding houses and anywhere else that was available and began their search immediately. 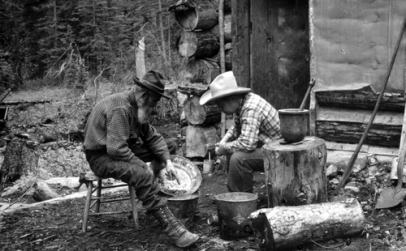 Even though most of the miners were male, women also used this opportunity to their advantage and many came to the area to run boarding houses, become prostitutes, cooks and even a few miners. There were plenty of other ways to get wealthy during the Gold Rush, as the demand for goods and services drastically increased. Samuel Brannan ingeniously purchased all the prospecting supplies that he could locate, shortly after the first discovery. He opened up a store to resell them and even helped to continue spreading the news. Brannan became one of the wealthiest men from the era, without ever having to mine for a single piece of gold. Levi Strauss began selling denim overalls to the miners in 1853, and became the pioneer of one of the most useful pieces of clothing ever designed.

The influx of people to the area meant that there was a constant demand for merchant vessels to bring in food and other supplies. Many of the ships that came suffered major losses, however, as the crews would abandon them to join in with the miners. The crewless ships were turned into warehouses, living quarters, taverns and even a jail.

The Effects of the California Gold Rush

This first worldwide gold rush transformed the State of California in just a few short years. By 1850, the population of San Francisco had increased from less than 1000 people to over 25,000 and by 1855; there were over 300,000 people in the state. When the gold was first discovered, California was still a part of Mexico. On February 2, 1848 a treaty was agreed between the countries and the land was signed over to the Americans. California legally became the country’s 31st state on September 9, 1850. 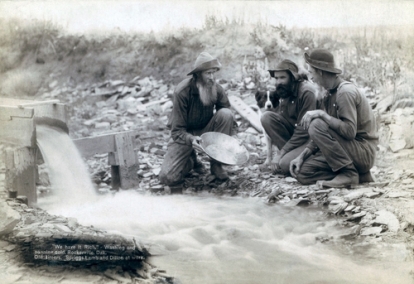 During the mass migration hundreds of thousands of people relocated to the West and it became imperative to have a good transport system coming in to the area. When The Panama Railway was completed in 1855, it became more convenient for steam ships to travel from San Francisco to Panama with mail, goods, passengers, and gold. It was then possible to continue from there to the East Coast of the USA in a much shorter period of time. The Gold Rush also financed the First Transcontinental Railroad that connected California directly to the Central and East USA.

The settlers began forming communities and schools, churches, roads, and permanent houses were built.  Many people began practicing large scale farming which was referred to as the ‘Second Gold Rush’ and by 1870, the San Francisco population had risen to over 150,000 people.

The California Gold Rush did not affect only those in the area, or even the country, but there became an economic boom as farmers found a new center for the distribution of their products. The majority of the food came from Chile, Australia and Hawaii, while clothing was shipped all the way from Britain and China. Worldwide jobs were created and the countries’ economies thrived. Edward Hargraves observed the similarities between the landscapes in California and Australia, and was able to start the Australian Gold Rush upon his return to the country.