Daniel Boone is one of America’s most celebrated pioneers, who spent many years exploring and settling the American frontier. He was of English and Welsh Quaker ancestry, and his parents had moved to the United States because of religious persecution. Boone was born on November 2, 1734 and left the Quaker settlement in his youth, following the disgrace of his two eldest siblings marrying outside the religion. The family settled in North Carolina and Boone quickly developed great skills as a hunter, and a vast knowledge of the woods. By the age of 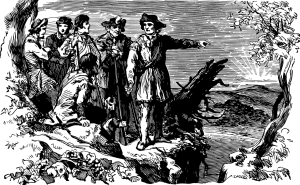 12, he was adept at catching wild game to feed his family.

Boone married another pioneer, Rebecca Bryan, in 1756, and provided for her and their children by hunting and farming. In 1769, at the request of an old friend, John Findley, he led a small group along the wilderness trails into Kentucky. They took a previously unexplored route through the Cumberland Gap, in the Appalachian Mountains, which led them along a ‘hunter’s paradise.’ Boone observed herds of buffalo, deer, wild turkey and other animals, as well as meadows that would make ideal farmlands. In 1775, he and 30 others began to improve the trails between the Carolinas and the west, creating a route which led into the heart of Kentucky. This became known as ‘The Wilderness Road,’ through which he led his family to a village he had built, called Boonesborough.

Before the settlement, the Native Americans had considered Kentucky their hunting ground. The tribes began to attack the settlers in the area for revenge. On July 5, 1776, Boone’s daughter and two friends were kidnapped outside Boonesborough by an Indian War party. The girls were carried north towards the Shawnee towns in Ohio. Boone followed the path of the attackers and ambushed them while they were having a meal, rescuing the girls and driving off the warriors off. This became the most celebrated event of Boone’s life, and has been converted into several popular stories. 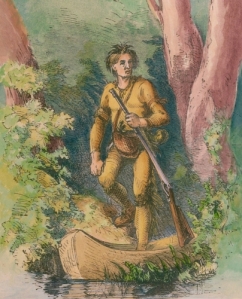 The Boonesborough settlement was attacked once more in 1777, by members of the Shawnee tribe, led by Chief Blackfish. During the village’s defense, Boone was shot in the ankle but carried to safety by Simon Kenton, who became his close friend. The Shawnees continued their threats, causing a food shortage in the village and a need for salt to preserve the meat that was already there. Boone led a party out to the salt springs at Licking River but was captured by warriors, led by Chief Blackfish. He returned the next day and convinced his men to surrender because they were greatly outnumbered. Blackfish intended to capture the settlement, because it was now poorly defended, but Boone promised him that they would surrender the following spring. The Shawnee often ‘adopt’ their prisoners into the tribe, to replace lost warriors, and Boone became an instant favorite. After he heard that Blackfish was planning another attack on Boonesborough, he escaped, returned home and successfully led the town’s defense in a 10-day raid carried out by the chief.

Another of Boone’s achievements was a promotion to lieutenant colonel of the Fayette County Militia, after which he was elected sheriff of Fayette County in 1782. He eventually moved with his family to Missouri, which was under Spanish jurisdiction at the time, where he served as syndicate and commander until 1804. After this Missouri became a part of the United States, and Boone continued to reside there until his death on September 20, 1820. 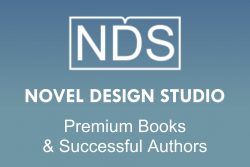