The Spaniards were the first set of people who drove cattle from one area to another, in the Americas. During the 19th century the scale on which this was done rapidly increased, as Americans began eating more beef than pork. The peak years of cattle driving were between 1866 and 1886, when over 20 million heads of cow were herded from Texas to Kansas, to be shipped to the stockyards in Chicago. The era of cattle drives has played a significant part of the history of the United States, and much of the culture in the west still reflects this influence. Cowboys and cattle ranchers were the first groups of European settlers to live on the Great Plains, adopting many Native American habits in order to survive. 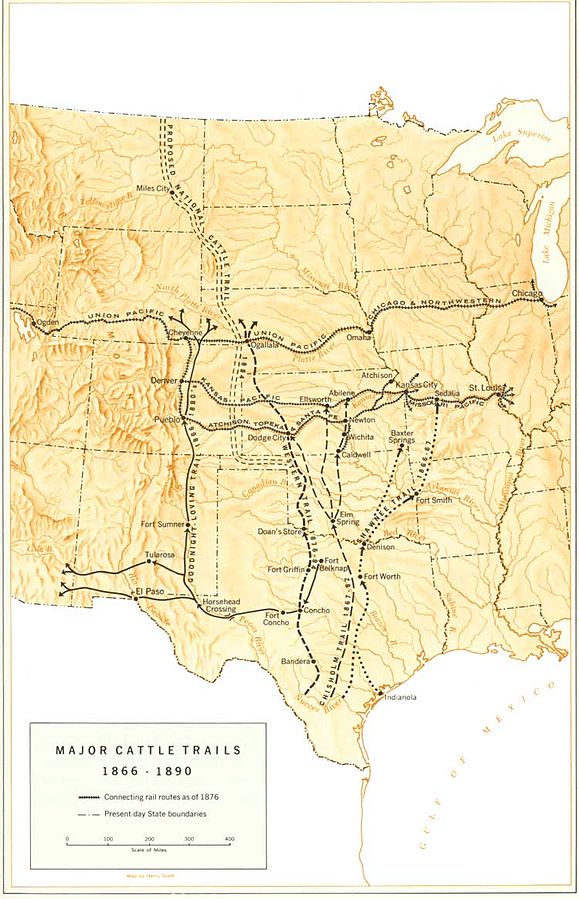 In the 1820s ranching began in Texas, with Mexican cowboys (vaqueros) controlling the majority of the ranches in the area. By 1836, American ranchers had driven them out, and confiscated their cattle. When they were forced to leave in order to join the civil war, which started in 1861, the cattle were left to roam freely in conditions where they thrived. They roamed the plains, eating freely and multiplying rapidly with few people about to limit their movements.

After the war these large herds were rounded up and sold along three main routes: the one leading to western areas such as New Orleans and California; north to Sedalia, Missouri where they were put on trains to Chicago (between the years of 1865 and 1870, when the increase in the demand for beef in the north had risen significantly); and those that were driven to Denver, Colorado to provide beef for the gold miners there.

When driving the cattle, the team had to be able to balance speed with maintaining the herd’s weight. The cattle needed to be fat enough to ensure a sale at the end of the journey, and it was the crew’s responsibility to monitor their weight gain. Groups moved about 15 miles daily, pausing at mid-day and during the night, for the cattle to graze and the herders to rest. Each herd consisted of an average of 3000 animals, accompanied by:

Crew members were paid after the journey, when the cattle were sold, and cowboys earned an average of $40 per month.